One bright mid-May morning in 1966, a nondescript, middle-aged man walked into a mining supplies store in Newmarket, north of Toronto, and asked to buy some dynamite. The young clerk asked him what he intended to do with the explosives, and whether he knew how to use them. The man replied that he was prospecting, and needed the dynamite to blow up some tree stumps. He reassured her that he knew how to handle explosives. He had worked in mines in the Northwest Territories. Satisfied by his responses, the clerk sold him six sticks of Forcite, a gelatin dynamite composed of sodium nitrate, along with six detonating caps and six feet of fuse with a burn rate of one foot per minute. A background check was not required. After the man had thanked her and left the store, the clerk realized that she had erred; the fuse burnt one third faster than she had told her customer. But it was too late to correct her mistake; the customer had vanished. Little did she realize that her error would have fateful consequences. 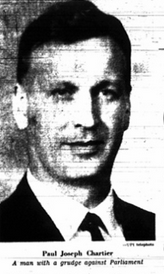 Paul Chartier, The Bomber of Parliament Hill, The Citizen, 19 May 1966

Wednesday, 18 May 1966 was a cool, cloudy, spring day in Ottawa. The big news in the nation’s capital that morning was the previous night’s vote of non-confidence in Lester B. Pearson’s minority Liberal government. The motion had been put forward by John G. Diefenbaker’s Progressive Conservative Party over tight money. The vote was unexpectedly close, 118-111. Most of the smaller opposition parties and independent MPs had supported the Conservative motion. That afternoon, the public galleries were packed with spectators, eager to hear the latest opposition salvoes against the government during Question Period which commenced at 2pm.

Among the spectators who had arrived to watch their country’s leaders in action were hundreds of school children. Also present was a middle-aged gentleman wearing an overcoat. It was the same man who had purchased the Forcite in Newmarket five days earlier. Entering the Centre Block of Parliament like any tourist visiting the Hill, he made his way to the Public Gallery on the third floor. But he was turned away; the gallery was full. Trying again, he went to the Ladies’ Gallery at the other end of the Commons chamber where an obliging commissionaire allowed him to enter and take a seat to watch the proceedings. He had an excellent vantage point. Facing him was the Speaker’s Throne.  On his left was the governing Liberal Party, while on his right were the opposition parties. As it was Question Period, the House was full. Both Prime Minister Pearson, and Opposition Leader Diefenbaker were in attendance. At 2.45pm, the man, still wearing his overcoat, left his chair to go to the men’s washroom located just a few steps across the corridor from the Ladies’ Gallery. He asked the guard if his seat could be saved. The guard said no; there was no reserved seating. But it was unlikely that somebody would take his seat as Question Period was almost over. Thanking the commissionaire, the man left. Minutes later, the Centre Block was rocked by a bomb blast emanating from the third-floor men’s washroom. Acrid fumes filled the hallways, seeping into Commons chamber.

On the Commons’ floor, there was confusion. Parliamentary business stuttered to a halt amidst calls for medical assistance. Diefenbaker rose to say “…someone had just passed away within the precincts of the House of Commons.” Prime Minister Pearson announced that “It appears that was an explosion” and “that a man has been killed under circumstances which are not yet quite clear.” The House temporarily adjourned.  Security staff escorted the deputies to safety. In the meantime, three doctor MPs hurried to the scene of the explosion. Groping their way through thick smoke, and stumbling over pieces of wood and masonry shards that littered the floor of the bathroom, they came across the mutilated body of a man stretched out in front of the urinals lying in a pool of blood. There was nothing that the doctors could do. Dr Philip Rynard (PC—Simcoe-East) pronounced the man dead. Dr Hugh Horner (PC—Jasper-Edison) said that it looked like the man had been carrying an explosive device when it went off.

The initial assumption that it was a suicide was quickly dispelled. It was something far more malevolent—an attack on Parliament itself, the first since Guy Fawkes had tried to blow up the British Parliament in 1605. There had been nothing like it in Canadian history. While there had been incidents of incivility, and in 1964 a protester had thrown a bottle of animal blood from the Public Gallery onto the floor of the House of Commons, there had never before been outright violence.

Police quickly put a name to the bomber—Paul Chartier, an emotionally disturbed, unemployed security guard, age 45. They tracked down his recent movements and where he lived—a rooming house in Toronto. At his lodgings, they found several sticks of dynamite, fuses, and two crude bombs. Police also uncovered some writings titled Young Years, which provided details of Chartier’s life, and his growing conviction that the world was against him.

Chartier, born in 1922, had grown up in small-town Alberta, one of nine children, his parents having moved west after World War I from Quebec. While his parents and siblings had made successes of their lives, Chartier drifted from job to job. He worked briefly in the mining industry in Yellowknife before joining the Royal Canadian Air Force during the war. While in the Air Force, he got into some minor trouble before being discharged in 1945. He then went into the hotel business, first with a brother, and later for himself. Married in 1951, both his hotel business and marriage failed within a few years owing to his growing mental instability. Abusive to his wife, his unsocial and erratic behaviour drove customers away. Subsequent careers in the dry-clearing business and as a truck driver also ended in failure. It was never his doing; it was always somebody else’s fault. After going bankrupt in 1961, Chartier left for the United States, where for the next several years he wandered around the country. For a time, he worked as a hotel security guard in New York. By 1966, however, he had returned to Canada. Unemployed, he found a room in a boarding house in Toronto. About a month before the fatal blast, he took a trip to Ottawa to check out Parliament Hill, staying under an assumed name at the YMCA.

Chartier returned to the Ottawa area the day before the explosion, renting a cheap $3 per night room at the Saint Louis Hotel in Hull. There, he assembled a pipe bomb weighing several pounds, and smuggled it into the Centre Block hidden under his overcoat. After viewing Question Period from the Ladies’ Gallery, he went to the bathroom to light the fuse of his homemade explosive device with the intention of throwing it at Canada’s leaders assembled in the House of Commons below. But the bomb exploded prematurely while he was making his way out of the lavatory cubicle towards the washroom door, severing his right arm, and inflicting massive injuries to his torso and face. He died within seconds of the blast. On his body was a speech titled If I was President [sic] of Canada. It was a speech he had wanted to deliver to deputies. Roughly two weeks earlier, Chartier has written a letter to Lucien Lamoureux, the Speaker of the House of Commons, asking for permission to address the House. The clerk of the House of Commons replied that only sitting elected Members of the House had the right to speak in the Chamber. Consequently, “there was no possibility whatsoever of agreeing to your request.” The rejection was the final straw, and set in motion Chartier’s attack on Parliament.

In the rambling, and sometimes incoherent, speech, Chartier made it clear that he had planned the bombing for about a year, and that it was his intention to “kill as many as possible for the rotten way you are running this country.”  He added “as for “Mr Pearson and Mr Diefenbaker, they sound like a couple of kids, jealous of one another as to who is going to get the biggest share of money and scandal…I blame parliament for divorces, separations and suicides and a lot of people are in jail not being able to make a living.”

At the inquest into Chartier’s death held four months later, experts testified that had Chartier managed to throw the bomb into the House of Commons chamber, one could have expected at least a dozen deaths, and many injured. It was only through luck, or Providence, that the mining supplies company clerk had misinformed Chartier of the burn time of the fuse. Added to this was evidence that Chartier himself had made a mathematical error when calculating the length of the fuse. This error reduced the time he had still further.

The blast shattered Canadians happy illusions about themselves, and about Canada as a calm, peace-loving nation. Was Canada so different from its America neighbour whose president had been assassinated three years earlier? If evil was in our midst, how would it affect our way of life? In an editorial, the Citizen newspaper opined that the “easy atmosphere of the Centre Block has always been one of the glories of our parliamentary life. The unguarded secure passage of our leaders through the corridors, made safe only by the good sense of the Canadian people, is surely worth preserving.”

Security on the Hill was reviewed after the blast. The Speaker of the House noted that it was “not easy to reconcile enforcement of strict security regulations with the degree of freedom of access to the building and the galleries that the Canadian people have come to expect when visiting parliament.” He strove to find a “reasonable balance.” Nevertheless, six months after Chartier tried to blow up members of parliament, a group of university students tested Parliament Hill security, by bringing into the Centre Block a tape recorder (a large, bulky machine back in 1966) concealed under a coat. They then went to the same washroom as Chartier had on the third floor, before visiting the Public Gallery to tape the proceedings as proof of their successful entry. They were never stopped. Subsequently interviewed on CJOH-TV, the students were threatened with fines and jail rather than applauded for demonstrating the continued gap in parliamentary security. After a cool meeting with Speaker Lamoureux, the students were let off with a warning, their test of Hill security considered a prank.