When next you have an opportunity to stroll through the Experimental Farm, take a look at the impressive red stone building with the verdigris copper, domed roof located off of Maple Drive close to Carling Avenue. It was once the Dominion Observatory, for a time the proud owner of the largest telescope in Canada. Its construction was due to the efforts of two men, Dr Frederick King, the first Dominion Astronomer, and Otto Klotz. The two initially worked together at the Cliff Street Observatory located on a small road overlooking the Ottawa River, roughly where the Supreme Court building stands today. This observatory was established by the government in the late 1880s to determine standard time, make “exact determinations of geographical locations” for explorers of the North West Territories, which at the time included Saskatchewan and Alberta, and to rate, test and adjust chronometers and other surveying instruments. 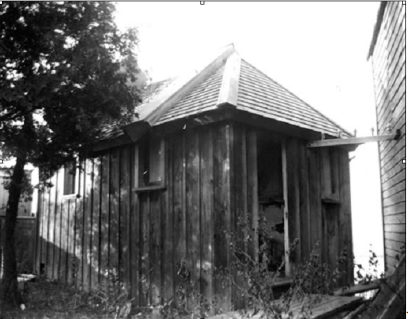 The facilities on Cliff Street observatory were rudimentary. Its 6-inch aperture equatorial telescope was too small for serious scientific work. Moreover, the building was on such a narrow lot that there was insufficient space to build a heated room for people working there. Even more problematic was that the observatory only had a clear view of the sky to the north over the Ottawa River and to the south, though its southern view was often obscured by smoke from the many coal burning fireplaces in Ottawa. Its east and west view were obstructed by other structures, including a stable.

Plans for building a new, larger observatory date from late 1898 when King with Klotz’s help sent a memorandum to Clifford Sifton, the Minister of the Interior, recommending the construction of a new government-owned observatory to replace the inadequate Cliff Street facility. In the memo, King argued that astronomical investigation in Canada had been long neglected. A new observatory would help to address this shortcoming. It would also be of considerable scientific value for many branches of science, and would stimulate the study of science throughout the Dominion. He also advocated for the advancement of “pure” science as opposed to just “practical” science on the grounds that unforeseen benefits can emerge from such research, and that the Government should not leave this “wholly in the hands of foreign investigators.” King also recommended that the observatory be built on a knoll of land on Parliament Hill between the Centre and West Blocks. Later, when the knoll became the location of the Victoria Monument, he recommended building the observatory where the Summer Pavilion stands behind the Parliament buildings. King estimated that a 10-inch telescope and the construction of a suitable building with a 22-foot diameter dome roof with rollers would cost $16,075.00.

According to J. H. Hodgson, the author of the definitive account of the history of the Dominion Observatory, Klotz, ostensibly King’s subordinate, disagreed vehemently with the proposed site of the new observatory. It seems that relations between King and Klotz, who once had been close friends, had deteriorated owing to professional jealousy and perceived slights. Klotz thought the proposed site was too small for a national observatory and considered Parliament Hill to be “hallowed and sacred ground,” that would be profaned by such a use. He also had a different vision than King’s for the work of the new observatory, envisaging it expanding into other related areas of scientific research. While he agreed with King that there was a pressing need for better facilities, Klotz disagreed with King’s recommendation of a 10-inch equatorial telescope, which had quickly grown into a proposed 12-inch instrument, on the grounds that neither he nor King had any experience on such a machine. Klotz believed that the funds could be better used on a geodetic survey of Canada. He thought King just wanted to be able to brag that he was the Dominion Astronomer in change of a prestigious, world-class telescope.

In the end, Klotz won the argument on the site for the new observatory. Before settling on its Experimental Farm location, other sites considered included the bluff at the end of Concession Street (Bronson Avenue) overlooking the Ottawa River, a lot south of Strathcona Park, a location close to Rockcliffe, and a city lot at the corner of Maria Street (Laurier Avenue) and Concession Street. Neapean Point was also a contender but was rejected owning to concerns that the vibrations of trains running nearby might disrupt the delicate astronomical equipment. While the Experimental Farm was distant from the city centre and civil servant offices, it had the benefit of lots of space, and unobstructed views far from Ottawa’s smog and lights. An extension of the Ottawa Electric Railway to the Farm would also solve the problem of ready access. 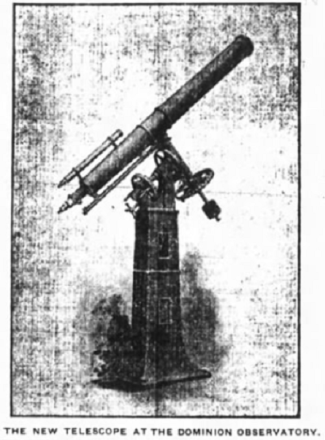 The 15-inch aperture telescope, The Ottawa Evening Journal, 1 May 1905

While Klotz won the argument over the observatory’s siting, King ruled over its instrumentality. He apparently had little trouble persuading the government to purchase a still larger 15-inch aperture, equatorially-mounted, refracting telescope and other astronomical equipment from Professor John Brashear of Pittsburgh, Pennsylvania. The local Pittsburgh newspaper headline read “No Limit As To Price.” The mountings for the 19 foot 6 inch long telescope, with a magnifying capacity of 1,500 times, were made by Warner and Swasey of Cleveland, Ohio. The instrument was completed by January 1903 at a cost of $14,625.59, well ahead of the completion of the observatory itself. The telescope was the same size as the one used at Harvard University, and second only in size to the huge 36-inch aperture Link telescope built in 1888 at Mount Hamilton, California.

The initial plans for the new two-storey high observatory with a revolving dome were drawn by government architects in 1901. David Ewart, the chief Dominion Architect, is credited for the observatory’s Baronial style architecture. Construction tenders closed in November 1901 with Theophile Viau winning the contract with a bid of $74,999. The contract was awarded in August 1902, and construction got underway shortly afterwards at the Experimental Farm. The final cost of the building was $93,800, far more than initially appropriated by the government for this project. It was ready for occupancy in April 1905. There were initially fourteen permanent staff members—all male. There were no female employees as no washroom facilities were provided for female personnel. 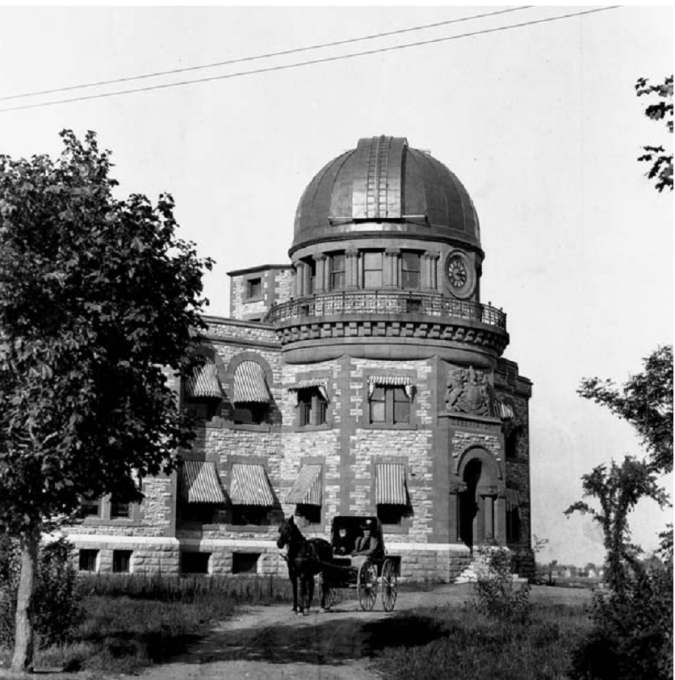 The state-of-the-art Dominion Observatory was unveiled to the men of the press gallery of the House of Commons on Saturday, 29 April 1905. That evening, journalists gathered in front of the Centre Block on Parliament Hill to be conveyed to the Experimental Farm. On arrival at the Observatory, they were met by the institution’s three leading astronomers, Dr King, Mr Klotz and Mr J.S. Plaskett, who explained to the men the workings of the astronomical instruments. With a clear sky, each journalist had an opportunity to view the constellations. Afterwards, Plaskett exhibited magic lantern views of Canadian scenery. (The magic lantern was an early slide projector.) Over coffee, Dr King spoke about the great value of the government’s contribution to the pursuit of astronomical knowledge. He hoped that the Dominion Observatory would be to Canada what the Greenwich Observatory was to England. Dr King indicated that one of the immediate practical benefits of the Observatory was the determination of the positions of various points throughout Canada used by surveys conducted by Dominion surveyors. The Observatory would also be used to calculate standard time for the country. Later, the Observatory conducted pure research into spectroscopic binary stars. (Spectroscopic binary stars are binary stars that are so close together that they cannot be viewed separately with a telescope. They are revealed by the Doppler effect on the light each star is emitting, shifting from red to blue as they move.) It also assumed responsibility for seismic, magnetic and gravimetric analyses. In 1914, a new building was built on an adjacent lot to house the Geodetic and Boundary Survey divisions. A full weather station was also maintained at the Observatory.

Within just a few years after the opening of the Dominion Observatory, its 15-inch aperture telescope was deemed to be too small. In 1913, the Ottawa Evening Journal opined that while the Dominion astronomers were doing sterling work on binary stars despite the small size of their telescope, a larger instrument was now necessary. The 15-inch aperture telescope was smaller than that of most national observatories, and was “altogether out of keeping with the standing of Canada.” It encouraged the construction at the Observatory of an instrument with an aperture of 60 inches, or better yet, one of 72 inches. The newspaper placed the cost at $70,000, with a special tower to house it costing an additional $40,000.

The newspaper’s argument found traction in government circles. Mr J.S. Plaskett of the Dominion Observatory designed a 72-inch aperture telescope. However, instead of Ottawa, the decision was made to locate it in Saanich, British Columbia, a site considered far superior to the Experimental Farm station. The Dominion Astrophysical Observatory on Observatory Hill was completed in 1918. It quickly became world renowned for its research into the Milky Way. 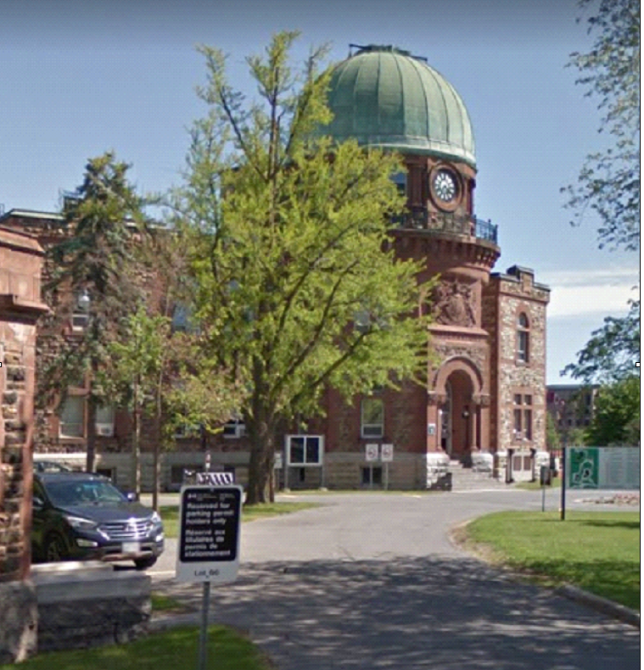 When Dr King died in 1916, Otto Klotz assumed his responsibilities as Dominion Astronomer despite his German roots and widespread anti-German sentiments at the height of the First World War. Klotz died in 1923. The Dominion Observatory in Ottawa continued operations until April 1970 when its astronomical and time-keeping work was assumed by the National Research Council of Canada. The Observatory’s 15-inch aperture telescope was given to Canada’s Science and Technology Museum. The old Observatory currently houses the Office of Energy Efficiency, part of Natural Resources Canada.

This site uses Akismet to reduce spam. Learn how your comment data is processed.