By the time of the Great Depression the automobile had replaced the horse-drawn carriage. In 1929, five million cars were produced in the United States, with another quarter million made in Canada. City streets were becoming clogged with vehicles, and parking was becoming a serious problem everywhere. Through the working week, people drove their vehicles to downtown offices, and parked them on neighbouring streets for eight hours or longer. This left little room for shoppers. Although the Depression drastically slowed the production and sale of cars, it didn’t solve the parking problem. Carl C. Magee, a noted American publisher, came up with a solution–the coin-operated parking meter. (Magee had become prominent during the 1920s for publicizing the Teapot Dome Scandal, the biggest U.S. political scandal prior to Watergate, that led to the Secretary of the Interior being jailed for corruption.) Magee, in co-operation with University of Oklahoma engineers Holger Thuesen and Gerald Hale, developed a working prototype. In May 1935, Magee filed a patent in the United States for a coin-controlled device, receiving U.S. patent 2,118,318 three years later for his invention. American cities took to the new invention like proverbial ducks to water as a way of encouraging motorists to vacate parking spaces. The fact that parking meters were a real money spinner certainly helped too. Meters paid for themselves in four or five months.

Oklahoma City installed Magee’s “park-o-meter” on its streets in July 1935, just weeks after Magee filed his patent application. Reporting on the event, The Ottawa Journal called the new device the “automat of the curbstone,” describing it as “a metal hitching post with meter attached” that promised “to solve the pest of the streets – ‘the parking hog.’” It opined that people will be watching the experiment with great interest.

Ottawa wasted little time in exploring the possibility of introducing parking meters to the streets of the nation’s capital. In 1936, City Council received an offer from one O. G. O’Regan to install parking meters in downtown Ottawa. In a letter, O’Regan explained that the cost of the meters would be paid by parking fees, and that after the costs were met, the revenue would accrue to the city. Ottawa’s Board of Control said that O’Regan should speak to the Automobile Club, the Board of Trade and other groups to educate the public about such a drastic change in parking regulations. In an editorial the Journal said that the parking meter was “so new that probably many people are unfamiliar with it.” Assessing the pros and cons of a trial, the newspaper argued that if free street parking is not a “right,” then Ottawa might as well make some revenue from it “if the privilege is to be extended.” Also, if meters reduced casual parking, merchants might benefit. However, the newspaper was uncertain whether Ottawa citizens would take kindly to the idea, and wasn’t sure if meters could be used with parallel parking.

Parking on Wellington Street in front of Parliament Hill, Ottawa, 1920s – already a problem, Department of the Interior/Library and Archives Canada, PA-034203. Notice the row of stately elm trees that lined the sidewalk. Sadly, they all succumbed to Dutch elm disease mid-century.

Ottawa did not take kindly to the idea. It took three attempts and twenty years before City Hall got the votes to install meters. On the first attempt in 1938, the Traffic Committee and the Board of Control recommended the installation of 903 meters in downtown Ottawa for a six-month trial period. Supporters of the measure hoped that meters would be more effective than existing parking regulations in curbing lengthy parking stays. In 1937, 14,000 parking tickets were handed out to motorists who had overstayed the 30-minute parking limit, but only 900 fines were issued.  Opponents argued that instead of unsightly meters, parking problems could be addressed through the enforcement of existing rules. Mayor Stanley Lewis opposed meters as did merchants who feared losing business if free parking was eliminated. A concession on the part of meter supporters to reduce the charge for the first twelve minutes to only one cent was not sufficient to change minds. With Toronto and Montreal having turned down metered parking, Council rejected meters on an 18-8 vote. The measure was put onto the backburner for a decade.

In 1947, the issue resurfaced. By this time, meters had apparently been installed in 1,200 U.S. cities and 49 Canadian communities, including Kingston, Oshawa and Windsor. Once again, the Traffic Committee and the Board of Control favoured their introduction. But Stanley Lewis, who still occupied the mayor’s chair, remained a steadfast opponent. At Council, the debate was fierce. Supporters argued that metered parking would allow for a more equitable distribution of limited parking spaces, would speed up business, reduce congestion, and increase municipal revenues. The anti-meter faction argued that meters would ruin the look of Ottawa, would clutter sidewalks, and that shoppers would avoid areas that had metered parking. Some also contended that metered street parking was a “nuisance” tax on motorists, and that their advantages were unproven. One alderman suggested that to reduce congestion, he would ban all parking on Bank and Sparks Streets, and convert part of Major Hill’s Park into a parking lot. “The park is only frequented by tramps, and the public do not go there.”

In December 1947, Council narrowly voted (12-10) in favour of installing parking meters for a one-year trial, and issued a request for tenders. One would think that this would have been the end of the matter—far from it. Two firms, the Mi-Co Meter Company of Montreal and the Mark Time Meter Company of Ottawa, submitted bids for the contract. Early the following year, the Board of Control selected Mi-Co on the basis that it offered the lowest price. However, City Council subsequently rejected the Mi-Co bid in favour of Mark Time meters. While Council did not have to select the lowest bid, the rationale for overturning the Mi-Co bid was murky. The Mi-Co Meter Company, whose meters were actually made in Ottawa by a company called Instruments, Ltd, indicated that it would seek an injunction to stop the city from signing a contract with Mark Time on the grounds that it had won the tender since its meters were cheaper and conformed to City specifications whereas Mark Time meters did not. Among other things, the City had specified that the dial indicating the amount of time available was to be visible on both sides of the meter. This requirement that was not met by Mark Time meters. After another stormy Council session, Council voted 17-7 to rescind the awarding of the contract to Mark Time. It was a pyrrhic victory for Mi-Co. Ten days later City Council overturned the parking meter trial on an 18-2 vote. According to the Ottawa Journal, this decision “positively, definitively, officially and finally” meant that parking meters would not be installed on Ottawa streets.

With the parking debate in abeyance in Ottawa, Eastview (Vanier), which was a separate municipality, got a jump on its municipal big sister by introducing parking meters in May 1951 along Montreal Road. The charge was one cent for the first twelve minutes and five cents for an hour of parking time from 8am to 8pm Monday to Saturday. The experiment was a great success with congestion along Montreal Road substantially reduced. The fine for a parking violation was $1 if paid within 48 hours at the police station, or $3 if the infraction went to court.

Shortly afterwards, despite the “definitive” decision not to install parking meters in neighbouring Ottawa, the City Council’s Traffic Committee again recommended the installation of meters on certain Lowertown streets and well as on Lyon, Sparks and Queen Streets. But with Charlotte Whitton assuming the mayor’s chair in 1951, the recommendation went nowhere. The pugnacious and irascible Whitton was dead set against parking meters. “[If] we want space on our streets for moving traffic, we surely don’t want to rent out public streets and give people the right to store their cars there,” she said. She favoured more off-street parking instead.

It wasn’t until after Whitton had been dethroned in 1956 that the parking meter issue resurfaced in any significant manner at Ottawa City Council. By this time, meters had become a familiar part of the urban landscape in most North American towns and cities. Toronto had succumbed in 1952 and Montreal two years later. The Journal newspaper had also for several years run a series of favourable articles on the success of meters in other towns in curbing traffic congestion and, incidentally, raising huge sums for municipal coffers. These articles were helpful in preparing the ground for parking meters. In mid-December 1957, Ottawa’s Civic Traffic Committee unanimously recommended the installation of parking meters, the last outspoken critic of the machines on the Committee having thrown in the towel. A few days later, City Council passed the measure virtually without debate, agreeing to install meters in central Ottawa in the area bounded by Laurier, Kent, Wellington and Elgin as well as in Lowertown along Rideau from Mosgrove (located where Rideau Centre is today) to King Edward and along bordering side streets for one block.

Within weeks of the tender being accepted in February 1958, meter poles began to sprout on Ottawa streets. After testing, the first meters went “live” on Rideau Street on Friday, 25 April 1958. Traffic Inspector Callahan said that the meters were effective immediately and “must be fed” wherever they had been installed. Motorists were also given instruction on how to park—with front wheels opposite the machines. If a car occupied more than one space, both meters would have to be fed, five cents for 30 minutes, 10 cents for an hour. It was also illegal for motorists to stay longer than one hour; topping up the meter was not permitted. A parking infraction led to a $2 ticket. The meters were a great success, especially financially. The meters began pulling in $3,500 per week, considerably more than had been expected, with annual maintenance and collection expenses placed at only $20,000. 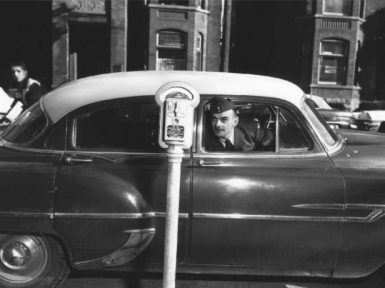 Over the next half century, the ubiquitous parking meter ruled downtown curbsides, standing every car length or two depending on whether single-headed or double-headed machines were being used. But in the 2000s, single-space curbside meters began to give way in Ottawa to multi-space machines (Pay and Display) that gave motorists a slip of paper that indicated the expiry time to be placed on the dashboard. This innovation permitted more cars to be parked on a given street, and eliminated “free” parking when a motorist parked in a spot with unused time on a standard meter. It also helped to reduce the clutter of unsightly meters on city sidewalks.

Other technological advances are also reducing the number of parking meters. Some communities have adopted in-vehicle parking meters—an electronic device that motorists can charged up and display on a car window. Others have embraced pay-by-phone parking with licence plate enforcement. In 2012, pay by telephone parking arrived in Ottawa through a system called “PaybyPhone” that is available in major cities around the world. After registering, a motorist enters a location number and selects the desired length of parking time up the permitted maximum. The parking charge is automatically debited to a credit card. Parking enforcement officers have a hand-held device that has real-time access to licence plate numbers and paid vehicles.

Looking forward, one can envisage further technological changes that could accelerate the demise of the parking meter, including in-car sensors and shared, autonomous vehicles that people call when needed. The parking meter, even the modern, multi-space machines now found on Ottawa streets, may soon become as rare as a telephone call box.

Ottawa, (City of), 2017. How to pay for parking, http://ottawa.ca/en/residents/transportation-and-parking/parking/how-pay-parking.