Each spring as winter’s snows begin to recede, the thoughts of Canadians turn to the Stanley Cup. One of the oldest sporting trophies in the world, the Cup is the symbol of hockey supremacy in North America. Its provenance is well known; it was purchased and given to the hockey community by Lord Stanley of Preston, Canada’s Governor General, in 1892. What is less well known is that Ottawa featured prominently in the Cup’s story. It was in Ottawa that Stanley let it be known his intention to provide a championship trophy. As well, during his vice-regal tenure in the nation’s capital, the Governor General, an avid hockey fan, and his equally hockey-mad children, did much to make hockey Canada’s national game. The Ottawa Hockey Club also played in the first Stanley Cup championship game.

The sport of ice hockey has a long history. It probably originated in “ball and stick” games played by both Europeans and natives peoples in North America. Shinny, an early form of ice hockey, was played on rivers or ponds in Nova Scotia during the early nineteenth century. Shinny could involve scores of players on each team, using a wooden puck, one-piece hockey sticks and hockey skates. Modern ice hockey dates from early 1875 when Halifax native James Creighton organized an indoor game at the Victoria Skating Rink in Montreal. Given the constrained skating surface, teams were limited to nine per side (reduced to seven in 1880). Played with a flat wooden disk using hockey sticks made by Mi’kmaq carvers from Nova Scotia, the game used “Halifax Rules” that included a prohibition on the puck leaving the ice and no shift changes. The match was an overwhelming success for both its participants and its appreciative audience.

In response to growing interest in the sport in central Canada, the Amateur Hockey Association of Canada (AHAC) was formed in 1886 with five teams, four from Montreal (the Victorias, the Crystals, the Montreal Hockey Club, and McGill College) and one from Ottawa, the Ottawa Hockey Club, known as the Ottawas.  The Ottawas were established in 1883 and were a frequent participant in hockey games held during the Montreal Winter Carnival during the 1880s.

Lord Stanley of Preston arrived in Canada in 1888 to take up his position as the Dominion’s sixth Governor General. An avid sportsman, he was introduced to the game of ice hockey in February 1889 when he and members of his family, including his eldest son Edward and daughter Isobel, visited the Montreal Winter Carnival. Arriving while a hockey game was in progress—play was temporarily halted on his arrival—the Governor General, his family and friends watched the Montreal Victorias defeat the Montreal Hockey Club.

Lord Stanley was instantly hooked on the game. He quickly built an outdoor rink at Rideau Hall, his Ottawa residence, for the use of his family and staff. He took to the ice himself, though he apparently got into some trouble for skating on the Sabbath. In March 1889, his Rideau Hall rink was the site of what is believed to be the first woman’s hockey match between a Government House team on which Isobel Stanley played, and a Rideau ladies team. Her brothers, Edward, Arthur, Victor and Algernon, were also keen hockey players. They played with various official aides, MPs and senators on a team dubbed the “Rideau Rebels,” but more formally known as the Vice-Regal and Parliamentary Hockey Club. The Rebels played exhibition games throughout eastern Ontario including Kingston and Toronto that helped to popularize the game. The fact that Lord Stanley had placed his vice-regal stamp of approval on the game was another important factor in hockey’s rapid acceptance as Canada’s national winter sport.

In 1890, Lord Stanley’s son, Arthur, along with two team mates from the Rideau Rebels, helped create the Ontario Hockey Association (OHA), composed of thirteen teams from Toronto, Kingston and Ottawa, later joined by a team from Lindsay. Today, the OHA oversees junior hockey in Ontario. During the late nineteenth century, long before there was a National Hockey League and professional players, OHA teams represented the cream of Ontario hockey. The Ottawa Hockey Club team played in both the OHA and the AHAC centred in Montreal.

The Stanley Cup dates from 18 March 1892. That night, a celebratory dinner for members of the Ottawa Hockey Club was held at the Russell House Hotel. The Russell House was Ottawa’s top watering hole at the time, standing at the north-eastern corner of Sparks and Elgin Streets, roughly between today’s National War Memorial and the National Arts Centre. The Ottawas had just finished a championship year, winning the Cosby Cup of the OHA and holding the AHAC championship from January to early March before losing it to the Montreal Hockey Club. The Ottawa Evening Journal noted that the back of the dinner’s menu cards recorded the achievements of the team: nine championship matches won to only a single defeat, during which the team scored 53 goals “against the best teams in Canada,” allowing only 19 goals the other way.

Accounts differ on the number of people at the dinner. The Journal reported that there were between 70 and 80 present, while the Montreal Gazette said that about 200 admirers attended. The latter, larger number probably reflected the addition of the ladies who joined the men after the dinner for “ices.” Mr J.W. McRae, president of the Ottawa Amateur Athletic Association, the senior umbrella sporting association to which the Ottawa Hockey Club was affiliated, presided over the soirée, while the band of Governor General’s Foot Guards provided suitable musical entertainment.

I have for some time past been thinking that it would be a good thing if there were a challenge cup which should be held from year to year by the champion hockey team in the Dominion. There does not appear to be any such outward and visible sign of a championship at present, and considering the general interest which matches now elicit, and in the importance of having the game played fairly and under rules generally recognized, I am willing to give a cup, which shall be held from year to year by the winning team.

I am not quite certain that the present regulations governing the arrangement of matches give entire satisfaction, and it would be worth considering whether they could not be arranged so that each team would play once at home and once at the place where their opponents hail.

The letter was enthusiastically received by the partisan hockey crowd.

Kilcoursie also revealed that the Governor General had commissioned his former military secretary, Captain Charles Colville of the Grenadier Guards, who had recently returned to Britain, to purchase an appropriate trophy on Stanley’s behalf.

After a series of more toasts, including one to the Ottawa Hockey team as well as others to members of the league, the Press and the Ladies, the dinner broke up at about midnight, though not before many songs were sung. In particular, Lord Kilcoursie entertained the party goers by singing a “ditty” titled The Hockey Men that he had personally composed to honour the members of the Ottawa Hockey Club. The first two verses went:

There is a game called hockey
There is no finer game
For though some call it ‘knockey’
Yet we love it all the same.

This played in His Dominion
Well played both near and far
There’s only one opinion
How ’tis played in Ottawa.

At the end, the crowd gave “a rousing chorus, rendered in stentorian style” according to the Journal, repeating the third verse of the eighteen-verse poem:

Then give three cheers for Russell
The captain of the boys.
However tough the tussle
His position he enjoys.

And then for all the others
Let’s shout as loud we may
O-T-T-A-W-A!

Over in England, Captain Colville purchased Stanley’s Cup from the London silversmiths G.R. Collis of Regent Street for the sum of 10 guineas (ten pounds, ten shillings). As one pound was worth $4.8666 in Canadian money, this was the equivalent to $51.10, a considerable sum in 1892.  On one side of the silver bowl with a gilt interior was engraved “Dominion Hockey Challenge Trophy,” while the inscription “From Stanley of Preston” with his family coat of arms was on the other. The Cup arrived in Ottawa the end of April 1893 and was entrusted to two trustees, Sheriff John Sweetland and Philip D. Ross. 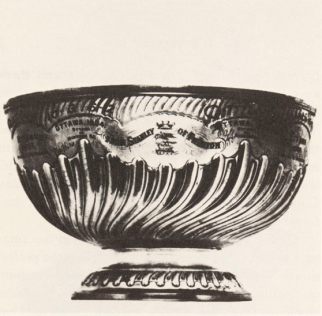 The original Stanley Cup. The silver bowl stands 19 centimetres (7 1/2 inches) high, and has a diameter of 28.5 centimetres (11 1/4 inches), and a circumference of 89 centimetres (35 inches), Library and Archives Canada.

The trustees announced that the Cup would henceforth be called the “Stanley Cup” in honour of its donor and, as specified by Lord Stanley, it would be a “challenge” cup. In other words, the Cup would be open for all. Any team could challenge the holder of the Cup for the championship title though the two trustees had the final say on whether a challenge would be accepted. Other conditions included the requirements that a winning team keep the trophy “in good order,” that each winning team (except for the first winner) would engrave its name on a silver ring fixed to the trophy at its own cost, that the Cup was not the property of any one team, and that in case of doubt over who was rightly the champion team in the Dominion, the trustees’ decision was final.

Unfortunately, the presentation of the first Stanley Cup in May 1893 was mired in controversy. The Montreal Amateur Athletic Association (MAAA) was awarded the trophy by virtue of the 7-1 victory of its affiliated hockey team, the Montreal Hockey Club, over the Ottawa Hockey Club, the OHA champions. The trustees duly engraved Montreal AAA on the Cup, and arranged for Sheriff Sweetland to present the trophy at the Association’s Annual General Meeting. The president of the Montreal Hockey Club, James Stewart, who was also a player on the team, was asked to attend the Annual General Meeting to receive the Cup. However, Stewart refused to accept the trophy until the terms and conditions related to holding the Cup were clarified. Enraged by this decision, and not willing to embarrass the Governor General’s emissary, Stewart accepted the Cup from Sweetland on behalf of the MAAA.

The spat between the MAAA and the Montreal Hockey Club went on for some months. After a number of letters between the two organizations and between Sweetland and Ross, a reconciliation was achieved, and the Stanley Cup was finally transferred to the Montreal Hockey Club in time for the 1894 championship game.  Held in late March of that year with the Ottawa Hockey Club, their long-time rivals, the match attracted some five thousand cheering fans to the Victoria Skating Rink in Montreal.  After Ottawa took a one-goal lead, the Montreal team stormed back with three unanswered goals to win the game 3-1 and the Cup. Later, the neutral words “Montreal 1894” were engraved on the Cup to avoid any hard feelings between the parent Montreal Association and its related Montreal Hockey Club.

Sadly, Lord Stanley, the man behind the Cup, was not there to witness the first challenge match for his trophy. He had returned home the previous summer to take up the duties as the 16th Earl of Derby following the death of his elder brother.