Canada was in its fifth year of war and Canadians could finally see light at the end of that long, black tunnel. In June 1944, Allied forces had landed on the beaches of Normandy and had successfully breached the Nazi defences of Festung Europa. By October, American forces were fighting on German territory around the Rhineland city of Aachen. The liberation of the Netherlands was underway by the 1st Canadian Army and other Allied units. In the east, Soviet forces had occupied Romania and Bulgaria and were on the outskirts of Warsaw (where they temporarily stopped, waiting for the Nazis to put down the Warsaw Uprising led by the Polish underground Home Army). While Hitler’s so-called thousand-year Reich was in its death throes, there was still much fighting and misery to endure. 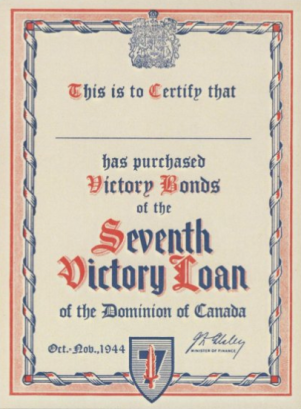 Certificate that could be framed and hung in a business that met their Victory bond sales objective, November 1944

In late September 1944, Finance Minister Ilsley announced Canada would raise a minimum of $1.3 billion in the Seventh Victory Bond—$700 million from large corporate investors, and $600 million from individuals. This was an increase of $100 million from the minimum set for the Sixth Victory Bond campaign earlier that year. (The Sixth campaign actually raised slightly over $1.4 billion.) The interest rate was 3 per cent on the long-term bonds, maturing in 1962. There was also a series of shorter term bonds issued at 1.75 per cent with a maturity of 4 years. The slogan for the Seventh Victory Bond was Invest in Victory. Its logo was the flaming sword patch of the Supreme Headquarters, Allied Expeditionary Force, in France.

The Victory Bond programme had begun in 1941, following two “Victory Loans” in 1939 and 1940, respectively, which netted the government roughly $550 million. Small investors could also buy War Savings Certificates on the payroll plan. The Victory loans, bonds and certificates were used to finance the war effort and to soak up the cash that was going into the pockets of Canadians. Despite price controls and high wartime taxes, there was a justifiable fear that with the economy operating flat out, inflationary pressures would rise unless Canadians saved.

Following their introduction in 1941, Victory Bonds were sold every six months with as much hoopla and razzmatazz as possible to generate interest. Sales teams were organized in communities across the country with objectives for general and payroll sales. To help raise their profile, Hollywood stars were also enlisted through the Hollywood Victory Committee. Film stars such as Spencer Tracy, Charles Boyer, Walter Pidgeon and Joan Fontaine made appearances in Canadian cities to help boost bond sales in between movie shoots. Percy Faith, the Toronto-born but U.S. based conductor, handled the music for Victory Bond campaigns. 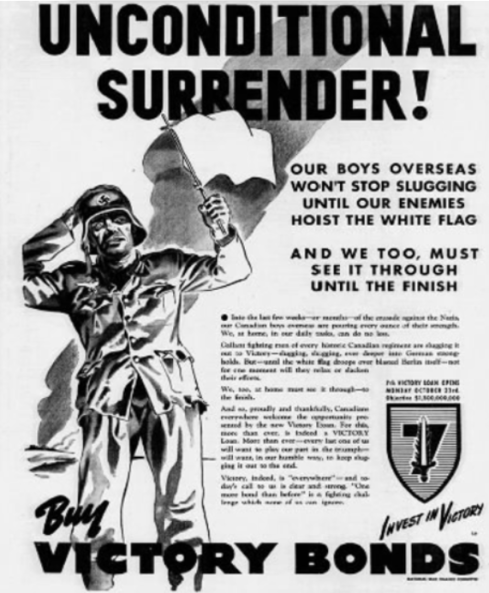 On announcing the terms for the Seventh Victory Loan in late September 1944, Finance Minister Ilsley said that the government’s increased borrowing needs reflected “the intense activity on all battlefronts.” Graham Towers, Governor of the Bank of Canada and Chairman of the National War Finance Committee, explained that in earlier years, just the navy and air force had been fully engaged. Now, all of Canada’s armed forces had been committed “to the struggle at sea, on land and in the air.” As well, war supplies were being used up faster than expected. “The tremendous operations which have begun so successfully on the continent of Europe must not be limited, nor men be sacrificed, for lack of firepower, equipment, or other supplies.”  Concerns about inflation were also strong. “Canadians have been told, over and over again, that all-out war production is possible only if they give maximum support to Victory Loans. And, this is very true. Without this support we would be in the grip of inflation” leading to “despair, discontent and social turmoil sweeping the land.” He warned that even after the war, inflation will remain a concern as soldiers are demobilized and industry is converted to peacetime operations.

To help launch the 7th Victory Bond campaign came Shirley Temple to Ottawa, accompanied by her parents, Gertrude and George Temple. Shirley, born in 1928, had been a child film star from the age of four when she appeared in Baby Burlesks in 1932. She hit the big time two years later when she starred in the film Bright Eyes, the story of a bachelor aviator (James Dunn) and his relationship with his orphaned goddaughter (Shirley Temple). The film was specially made to showcase her talents. Her musical number On the Good Ship Lollipop became hugely popular. In 1935, she won a special Juvenile Academy Award for her contributions to cinema. Also that year, in The Little Colonel, Temple performs the staircase dance with the legendary Bill “Bojangles” Robinson in the first inter-racial dance number. Little Shirley Temple’s dimples and smiles were the needed tonic for a Depression-weary nation. She became the top box-office draw in North America for four years in a row.

By 1944, Shirley Temple was no longer the ringleted little girl of her early movies. She was now 16, and was making the transition from a child actor to an adult performer. On contract with producer David O. Selznick, Temple wasn’t allowed to sing or dance in order to provide some distance from her earlier screen persona. In July 1944, the movie Since You Went Away was released by Selznick International Pictures. A war-time drama set on the U.S. home front, Temple plays the adolescent daughter of a mid-western housewife (Claudette Colbert). Jennifer Jones plays Temple’s older sister. The movie garnered eight Academy award nominations and won one for best music at the 1945 Academy Awards. 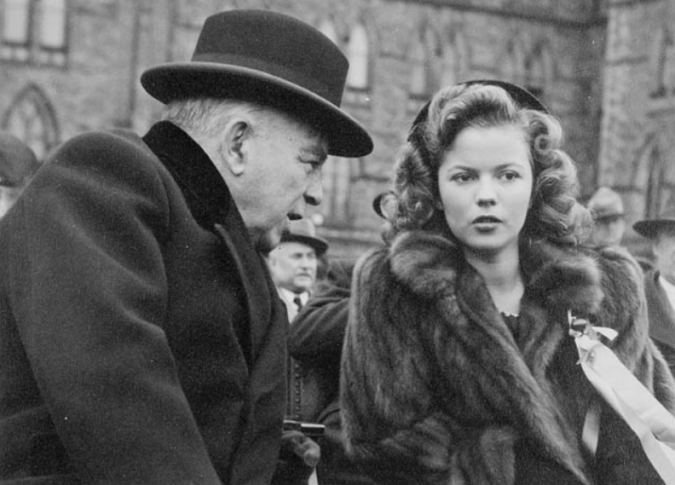 Temple arrived in Ottawa from California after stops in Toronto and Montreal to boost sales of Victory Bonds in those two cities. There, she was accompanied by an up-and-coming Canadian actor, Alexander Knox, who had made a name for himself in the Darryl F. Zanuck movie Wilson. Knox played the lead role of Woodrow Wilson in the docudrama. The movie went on to win five Oscars in the 1945 Academy Awards. In Montreal, Temple showed off her linguistic abilities by being interviewed in French.

Shortly after her arrival in Ottawa, two enterprising boys managed to get Shirley Temple’s autograph. After being stopped by Mounties from approaching her when she was at Union Station, the two darted down the tunnel to the Château Laurier Hotel. Although challenged by a porter, they managed to sweettalk their way onto an elevator. After knocking on the door of the Temple family’s suite, they talked to her father, George Temple, who introduced them to his daughter.  After a couple of frantic moments trying to find a pen with ink, the two boys obtained her autograph. 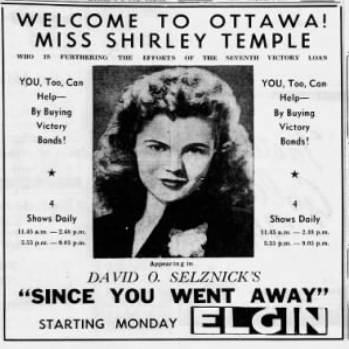 Shirley Temple’s latest movie, Since You Went Away, opened at the Elgin Theatre on 23 October 1944, two days after she opened the 7th Victory Bond Campaign, Ottawa Citizen 21 October 1944.

The official launch day for the Seventh Victory Bond campaign was 21 October 1944, a chilly, overcast Saturday in Ottawa; sales of the bonds had already commenced among Canada’s servicepeople. The highly choreographed event started at 12.15pm when Shirley Temple, wearing a full-length mink coat, came out of the door of the Peace Tower on Parliament Hill with Prime Minister Mackenzie King, Mayor Stanley Lewis, members of King’s Cabinet, and Graham Towers. Prior to stepping outside, Temple and Mayor Lewis had exchanged “short snorters” with each other—dollar bills with their autographs on them. She had also bantered with the Prime Minister, asking him if he had memorized his speech.

The film star and government dignitaries were greeted by a roar of thousands of spectators standing on the greensward in front of a dais set up at the base of the Peace Tower. Shirley Temple’s name was chanted and spelled out by students from five Ottawa high schools—Lisgar, Glebe, Commerce, St Patrick, and Ottawa Tech., who were assembled in roped-off areas. Each school held up a placard with its name on it. Cheerleaders jumped and cavorted, exhorting their compatriots to shout their school yells. The students were there to greet both Temple and five servicemen, one from each school, who had returned home from the battlefields abroad. Also on the dais were nine returning servicemen, one from each of Canada’s provinces.

After the programme of the afternoon’s activities had been announced, the first of the local returning servicemen was introduced—Private Bert Draper of the High School of Commerce. He was followed by Pilot Officer Peter Pennefather of St. Patrick’s and F.O. Don Cheney of Glebe Collegiate. Cheney had flown over Germany eleven times, had bailed out over enemy territory and had somehow made his way back to Britain. F.O. Lorne Frame followed. He joined in the Tech.’s school cheer. The last returnee, Lisgar’s F.O. Garn Wright was introduced over national CBC radio.

A number of short speeches followed with Prime Minister King underscoring the great financial challenges still ahead of the Canadian people. He also paid tribute to the returning servicemen and those who have long awaited their return. Finance Minister Ilsley commented that the “repats” “had experienced the grimness of war first hand” and “would be the first to warn Canadians against any idea the war would end soon.” Mayor Lewis followed saying: “We who waited and watched in safety must accept the responsibility that was placed on us to shorten the war and support the men who fight for us.” Justice Minister Louis St. Laurent provided similar sentiments in French. 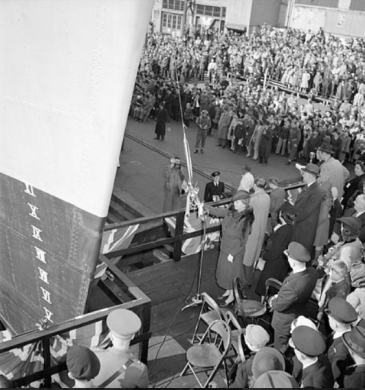 Launch of HMS Myrmidon by Mrs. C.D. Howe. The 1,000th ship built in Canada since the beginning of the war, 21 October 1944, Harry Rowed, National Film Board, Library and Archives Canada.

Then came the climax of the day’s events—the launching of nine ships from shipyards at ports across the country. The nine servicemen from each province were placed in front of a bank of microphones, where each in turn spoke over the air to a loved one—a mother, sister or sweetheart—in one of Canada’s ports. After some personal banter, the servicemen in turn gave the signal to their loved one to launch a ship. After each launch, the bells on the Peace Tower rang out.

In all, four cargo ships, a transport ferry, a maintenance ship, an ocean-going tug and two Algerine minesweepers were christened and released into the waters of the Pacific, the Atlantic and the Great Lakes. The ninth ship, one of the minesweepers, was the 1,000th ship constructed in Canada since the start of the war. It was launched into Toronto Harbour by Mrs C. D. Howe, the wife of the Canadian Munitions Minister, on the instruction of her son Lieutenant William Howe of the Royal Canadian Navy.

At the end of the elaborate ceremony, Shirley Temple’s car was mobbed by well wishers, both young and old, as it made its way slowly down the east drive on Parliament Hill towards the Château Laurier Hotel.

Shirley Temple made a second, successful wartime movie for David O. Selznick, called I’ll Be Seeing You released in late 1944. However, her later films fell flat. She married John Agar in 1945 at only 17 years of age. The marriage didn’t last, the couple divorcing in 1950. Temple married Charles Black that same year. On her marriage day, she announced that she was retiring from film. She was only 22 years old. This did not mean the end of Shirley Temple, however. She appeared on a number of television shows during the 1950s and 1960s. Active in the Republican Party, for which she unsuccessfully ran for Congress in 1967, she became a career diplomat. President Nixon appointed her as a delegate to the 24th General Assembly of the United Nations in 1967. She subsequently served as the US Ambassador to Ghana, Chief of Protocol in Washington D.C., and US Ambassador to Czechoslovakia, her time as ambassador coinciding with the “Velvet Revolution” in 1989. She died in 2014 at the age of 85.